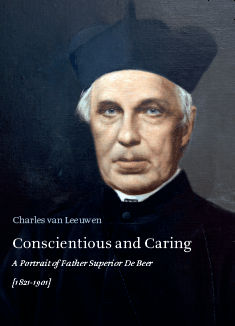 This second volume of the History of the Brothers of Our Lady Mother of Mercy is dedicated to Father Superior De Beer, the first superior general to lead the congregation from 1846 till 1900. His portrait is important to understanding the spirit of the foundation and the first half-century of the brothers’ history. After making his profession for life, De Beer took on a leading role in a small community of seven brothers in Tilburg. When he resigned from his position as superior general, the congregation had more than five hundred members working in different countries.

What was De Beer’s view on religious life and how did he convey his spirituality? How did he see the brothers’ mission and which choices did he make for the brother house? How did he guide the congregation and what was his relationship with its founder, Bishop Zwijsen? From 1882 till 1892, Father Superior De Beer was dean of Tilburg. How did he lead the local church and how important was this network to the development of the congregation?

De Beer led a sober life of simplicity and restraint and followed a precise routine of prayer and spiritual exercise. He was a very demanding father superior who had a hand in every detail of religious life. This did not make things easy for the brothers. By contrast, he tried to make community life warm and friendly. He believed in the importance of hospitality and was very generous; he embodied the Christian ideals of charity and mercy. De Beer was a meticulous administrator of the schools and institutes founded by the congregation during his period of office, and a caring superior who always had time for the elderly and infirm in his community. He saw himself as an ‘educator of educators’ and preferred to operate behind the scenes, leaving the practical side of teaching and raising children to his fellow brothers. Father Superior De Beer did not seek the limelight. He just wanted to serve the church and the Catholic society, especially the poor and needy.

Charles van Leeuwen, Conscientious and Caring. A Portrait of Father Superior De Beer (1821-1901) (History of the Brothers of Our Lady Mother of Mercy, 2). Nijmegen: Valkhof Pers, 2014