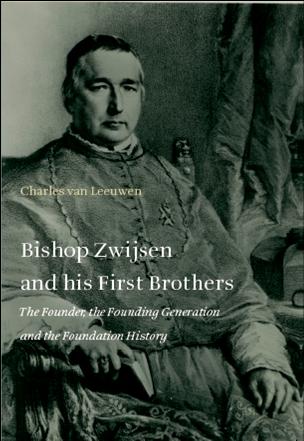 Bishop Zwijsen and his First Brothers. The Founder, the Founding Generation and the Foundation History

This first volume of the History of the Brothers of Our Lady Mother of Mercy aims to capture the dynamics of the founding of the congregation. It begins with the story of the foundation’s various phases, between 1844-1846, in the industrial town of Tilburg. To succeed one must begin, the rational and pragmatic founder, Bishop Joannes Zwijsen, was often heard to say, but the early beginning was more difficult than that. Many things had to be managed in concert, such as obtaining church approval, building the brother house, bringing together interested candidates, organising work and income for the community and arranging the first religious formation.

The second part focuses on the first generation of brothers. What were the people like that started the congregation and what was their spiritual horizon? What were their expectations? How did Bishop Zwijsen approach vocation work? What did he tell them about the meaning of religious life? Where did the first brothers receive their religious formation and how much of it did they assimilate? How successful was the noviciate in the early years?

The third part focuses on the founder himself and his personality. What kind of man was Bishop Zwijsen and how did his personality shape the young congregation and impassion its spirit? The brothers, who for a long time were referred to as ‘Zwijsen’s Brothers’, adopted many of their founder’s characteristics and preserved them in the spirit of the congregation. His basic life choices, like his major work on behalf of the Catholic Church and his close involvement with society’s poor and vulnerable, were the blueprint for the ethos of the congregation. In a spirit of service, brotherhood and mercy, the brothers started dedicating themselves to challenging religious and social needs.

Charles van Leeuwen, Bishop Zwijsen and his First Brothers. The Founder, the Founding Generation and the Foundation History (Valkhof Pers, Nijmegen 2014). History of the Brothers of Our Lady Mother of Mercy, volume 1. Prijs: 19,95€